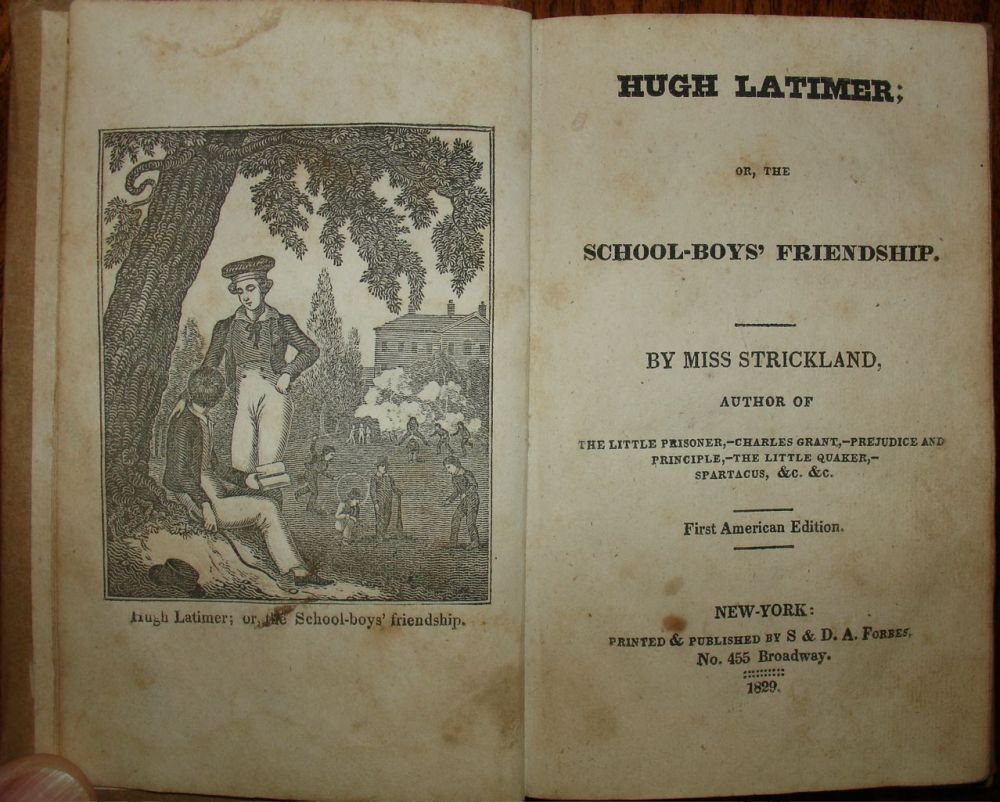 I’ve wanted to read this extremely rare novel by Susannah Strickland for years, so you can imagine my excitement when I recently discovered a readable grainy microfiche version. I have to confess it’s the first time I’ve ever read a book this way, but it was well worth the effort.

The novel revolves around a 12 year old boy called Hugh Latimer who attends a foundation school as a scholarship boy. He is the son of a widowed shopkeeper and gee doesn’t he get some abuse from his aristocratic peers. The children taunt him with insults like ‘beggar’s brat,’ but Latimer struggles on bravely through his school days with the help of his best friend Montrose. As the book progresses the boys develop a deep and lasting friendship and they learn much from their uncles and school master, Mr. Manby. From the very start, when Hugh asks to be taken from the school, his uncle asks ‘what would you rather be a gentleman or a shopkeeper?’ when Hugh replies the former, his uncle retorts ‘well don’t let them take that advantage from you’. The novel is also rich in biblical lessons, especially those found in the the book of St. Matthew, and one is given a real insight into early 19th century mentality. The author Mrs. Strickland develops several themes in her writing which she feels strongly about; in particular, she exposes and tackles class and racial prejudices which were both problematic during this period. In one scene the boys are walking arm in arm and happen to meet a black youth who enters the school with a basket of cakes on his head. Being a book of its time we encounter a vexing racist attack. The author lectures the reader on the evils of idleness and highlights this as the reason for the assault. Our hero Montrose then appears on the scene and threatens to thrash the boys for their inhumanity. When they leave we hear him addressing the youth ‘so where do you live, Blackey?’ He is clearly a thoughtful boy, but he has much to learn! Anyway, after the youth refuses their financial assistance, Montrose decides they should all visit his uncle. The Colonel then repays old ‘Blackey’ and after a long fruitful lecture he joins their hands and solemnly declares they must remain friends for life.

Later in the story with the introduction of Sinclair, the novel turns its focus to class prejudice. The pompous Sinclair with his upper class ancestry causes great mischief to Latimer’s friendship with Montrose. Having seen this unfold, Mr. Manby invites Hugh to his residence for tea. Hugh confesses he is heartbroken after being forsaken by Montrose and here Mr. Manby reveals his own humble origins as a foundation boy. He recalls being bullied by a youth called Carey, who spared few opportunities in humiliating him in front of his peers. One summer’s morning while out walking his dog he noticed somebody struggling in the water. It was Carey, and feeling nothing but indignation he decided to stand by and watch him drown. It was only after his dog jumped in the water and swam towards the boy that he came to his senses and dragged Carey onto the riverbank. Manby continues by explaining how they wept in each other’s arms, forgave the past and how Carey died peacefully in God grace, washed free of all his sins [naturally Carey’s death is full of pious reflections and comforting promises of everlasting life].

In the latter part of the novel Montrose invites Latimer to his uncle’s for the holidays. Of course Latimer initially hesitates after hearing that Sinclair and his siblings will also be there. Latimer arrives at the Colonel’s house and a week passes without any news from the brats. The boys and the Colonel spend their happy days in the pursuit of knowledge and science. When the arrogant Sinclair finally arrives he sees Latimer playing chess with his sister and declares he is no suitable playfellow for his sibling. The next morning Sinclair ignores Latimer’s salutations, and Montrose launches into an angry rant in defense of his friend. The Sinclair brothers leave the room and the Colonel tries to patch things up. The week passes in haughty politeness but with no sense of any warmness developing. Later, during a group drama where the parts are divided according to personality, the Sinclair sisters remark that ‘Latimer’ should naturally be the servant. The wounded boy retaliates: ‘what of it. My father was once a proud servant who died fighting for his country’.

While Montrose is downstairs chatting with chums from school, Latimer hears one of the girls shrieking as her dress catches fire. She is completely engulfed in flames so he raps her in a blanket and manages to singe off his eyelids so severally he cannot see for days. Next there follows a mawkish and unrealistic scene where the Sinclair’s fall at Latimer’s feet weeping and forgetting their old prejudices, thank him for saving their sister’s life. A few days later when the party departs (with Hugh still bedridden) he is given ‘handsome gifts’ for the services he rendered to the girl. The Colonel then sits with Latimer and points out a sword hanging on the wall. When he asks the boy to guess who that sword belonged to, Hugh, answered ‘to a hero?’ to which the Colonel replies, ‘yes, it was your fathers’. An ecstatic Hugh then asks the Colonel how he knew his father.  The Colonel explains how he was not dissimilar to the haughty Sinclair in his youth and had treated Latimer’s father (who was his commanding officer) with much contempt because of his humble origins. After repeatedly trying to antagonise him he eventually struck him in the face. The noble officer reminded him that he could be sentenced to death for his affront, but concluded how he was grateful there were no witnesses, as the matter could now end in a truce. As a sign of new found respect they exchanged their swords.

In the process of time the two boys become top of their school. The famous Lord Peterborough is passing through the area and requests to see the establishment. Latimer as the head scholar delivers an excellent speech in Latin, and after making some enquiries Lord Peterborough learns he is the son of the brave soldier who had thrice saved his life. To return the favour Hugh is awarded a pair of colours by the peer and a 50 pound annual pension for his mother and lame uncle. And here the novel concludes with the following beautiful paragraph:

‘The two young friends entered the army together; they served in the same regiment, fought in the same battles, and bled the same cause. Montrose, after many gallant actions, was made Lord Grahame; and his friend Latimer, rising by degrees to the height of his profession, received the badge of knighthood from the hand of his sovereign’.

For me, this book was both charming and silly at the same time. Often the scenes were overly mawkish, and the boys’ relationship was too mushy. Nevertheless, if one can see past this, and have the patience to wade through the religious moralising and shallow characters, I think it is well worth a read, even if only to appreciate the forward thinking ideas of the author.